A US NAVY EXPERIENCE 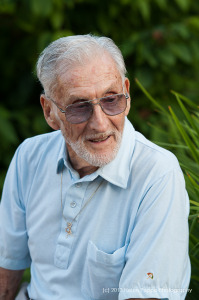 Sometimes we need an outsider to remind us who we are. In 1943, I was a 17-year-old Bronx smart-aleck who thought he knew it all. I enlisted in the Navy and was sent to boot camp, assigned to F barrack, F for Farragut, the famous Naval Officer. Each of the ten barracks had 120 men who had to learn to work together as a team. Volunteers and draftees came from all over the United States, ranging in age from a 16-year-old who’d lied about his age to several older men in their 30’s. We knew we’d have to make adjustments and that personalities would clash. They did, resolved by our Chief Petty Officer who took no guff. When we complained about a recruit who didn’t bathe, he said, “Handle it after taps” and we did, with a scrub down of lye soap and a floor scrub brush.

Almost everyone on base went to church in the chapel. During the second week, the Protestant Chaplain visited each barrack, telling each Jewish sailor to be dressed and ready to go on Friday for Sabbath services. No one argued. He had two gold stripes on his sleeve. As the Chaplain collected us from each from building, many of the other sailors stopped to watch as we grew to a total of 20, maybe 27, Jewish sailors. The Chaplain led services, a bit in Hebrew, mostly in English, very few of us really contributed to the service. The chaplain’s first d’var Torah was about the history of the Jewish people and what they contributed to the world. The next week the chaplain, after marching (more like shuffling) us to services, asked us about our Jewish upbringing. Were we bar mitzvahed? Did we go to synagogue? He asked what we thought and felt, how our Jewish faith sustained us. As the weeks went on, our small group began to open up to each other and to the Chaplain. The word “anti-Semitism” was not used very much; we said “Jew-hater.” We talked about being called “Jew Bastard” and “Dirty Jew.” The Chaplain helped us understand how we should be proud not only of ourselves, but also of the Jewish people’s contributions to the world. Depending on the weather, we held Shabbat services in the woods; the Chaplain gave us the choice. Within two months, we not only marched to services, but took on responsibility for calling out the cadence as though we were on Parade. We left boot camp with pride and confidence. As I write this memory, I regret that I can’t remember the Chaplain’s name. At the same time, I still feel how proud I am to be a Jew and to let the world know it. To my children, grandchildren and great-grandchildren, may you be as fortunate as I am, to know what it means to be a Jew. Whether you believe in God or not, believe in the Jewish people and stand proudly in the world.