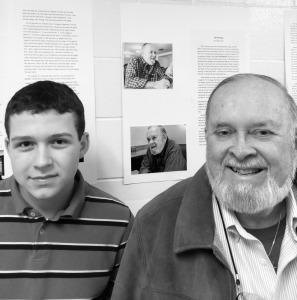 This is a story of my visit to the Betsy Ross House. At first when I, Jake Hardin, heard we were going to this place, I felt it was going to be difficult and stressful. But after a few minutes during my first visit, I realized how interesting senior citizens can really be. To my surprise, the man I interviewed, Bill Whitman, marched and sat in prison with the famous Dr. Martin Luther King, Jr.! By looking at him, nobody would’ve guessed that he knew famous people. He had bright blue eyes, a beard, white hair, and broad shoulders. When I shook his hand, it hurt! (Now I know how my friends feel when I shake hands with them.) He has an excellent memory, and was willing to talk about anything. He was very patient—he waited for us while we got ready, and didn’t mind when we kept asking questions.

What puzzles me though, is what impelled Bill leave his comfy college life for the buggy, sweltering life with Martin Luther King? The answer is because at Drew University, in New Jersey (the state I was born in) the man who was Martin Luther King’s mentor taught in the seminary attached to the school. Martin Luther King would come up and visit his mentor when he felt discouraged, which was when he and Bill met. After a semester and a half of college, he left and worked two and a half years in the Civil Rights Movement. Bill and Martin, along with
others, would move around Alabama and Mississippi from town to town, organizing a lot of things while sleeping on the floors of southern churches. Eventually, they got jailed. In the end, the FBI said King was a communist for stirring up trouble and his associates were communists and dangers (including Bill).

While Bill, Martin Luther King, and other people went on strike, they were forced to endure many horrible things which include being sprayed by fire hoses, cow dung, dogs, yelling, beating, etc. Worse, they didn’t fight back because violence never solves problems and because it would start a riot.

What my biggest question was is, “What was your reaction when you learned King was assassinated?” Bill’s answer was that that was a hard year. He also said it was no shock but it was heartbreaking (which was when he started to cry). Both he and King knew it would happen eventually, though. Bill knew three famous people (including King) who were assassinated.

That is the story of Bill Whitman.