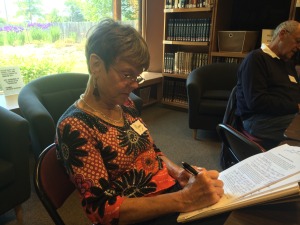 I was forty when I got married, having given up the notion of such a thing ever happening—not bitterly giving up, not resigning myself to a life of the proverbial spinster—but rather in a place of peace and acceptance.

My track record with men was abysmal; six months in an intimate relationship had been about all I could handle. I would completely lose sight of myself in every relationship, trying desperately to twist myself into whatever shape the current “he” wanted me to be. I could be a fisherperson, a Buddhist, a football fan, a macrobiotic zealot—whatever I thought was expected. Each relationship ended the same way: I could no longer sustain being in chameleon mode, so I would pick fights or find some other way to be obnoxious, at which point he would break up with me, this validating my firmly held conviction that all men were hopeless turkeys and not worth the effort.

In my 39th summer, I spent three weeks in California doing a variety of things that were outside of my comfort zone but which turned out to be profound. The first week I attended a family dynamics workshop where it came home to me once again that the marriages in my nuclear and extended families were nothing I desired to emulate. Week 2 was spent at the Esalen Institute on the Pacific coast having massages and sitting in a co-ed hot tub with a bunch of California types who did that sort of thing all the time. The third week I stayed with a friend who, while she was at work, allowed me to drive her jazzy little sports car up and down Big Sur doing whatever I wanted. Needless to say, I returned home from that trip feeling totally and completely mellow, firmly wrapped around the core of who I believed myself to be and, for the first time ever, comfortable with my life and its circumstances.

A few days after I got back, in this frame of mind, body and spirit, I went to a meeting I regularly attended every Thursday night, and that is where and when it happened. I finally stopped staring at the guy sitting up front who never noticed that I existed, paid attention to what was going on at the meeting and even added some comments of my own. As I prepared to leave, having gathered up my belongings, I stood up and was face to face with these two huge brown eyes that literally took by breath away.

That was the beginning. We were married a year later and just celebrated 29 years. I don’t know about marriage in general; I only know about this one. What I can say about this one is that it has been probably the most growth producing, challenging, nurturing and spiritually enhancing journey I have ever been on, and the only journey I have been on for even close to this long. And I am here to stay.