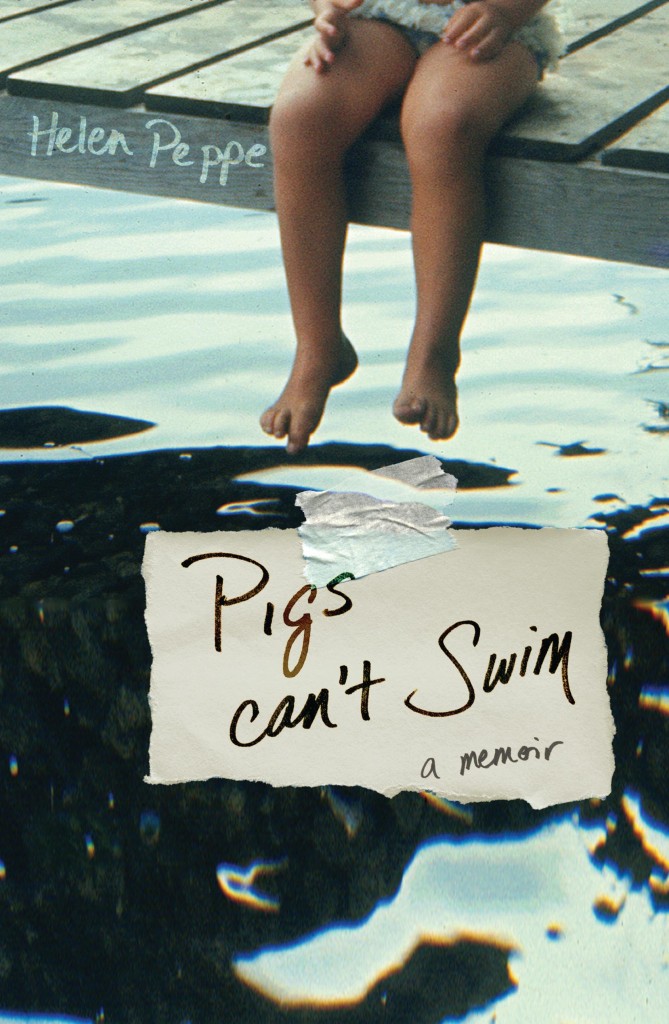 “My mother was determined and desperate to raise good children.  However, just like those people who buy sweet baby chimpanzees and are surprised when they grow into adolescents who bite them repeatedly before one day escaping in a flurry of hoots and hollers, my mother lost control.  Lacking the teeth and strength of apes, my siblings used cigarettes, alcohol, and sex to rebel.” –Pigs Can’t Swim: A Memoir

As the youngest of nine children growing up on a farm in rural Maine, Helen Peppe never seemed to fit in with the rest of her family. While her sisters focused on boys, cigarettes, and alcohol, Peppe preferred to curl up with a book. Once she learned the animals on the farm were raised to be eaten, she became the family’s only vegetarian. And no matter how many times her parents and siblings berated her for talking too much, Peppe could not stop asking questions about the world around her.

Pigs Can’t Swim tells the story of Peppe’s childhood as the odd one out in her chaotic family, describing her encounters with issues of race, class, animal rights, molestation, teen pregnancy, and more coming-of-age confusion than anyone should endure. Unable to feel a sense of belonging in her tumultuous household, Peppe formed strong friendships with the family’s animals and buried herself in the work of James Herriot and Steven King as she made her way through sixteen years of family conflict.

Despite her life’s many hardships, Peppe manages to fill Pigs Can’t Swim with humor, insight, and touching compassion for the family that was never able to understand her. Constantly finding herself in trouble despite her efforts to avoid it, the young Peppe maintained an unfailing innocence that proves both charming and heartbreaking.

Though she spares their names as she lovingly recounts their stories, readers will find Peppe’s siblings familiar: there’s the blustery-and-favored- brother, the hair-twirling-pretty sister, and who could forget the sister-who-holds-grudges-longer-than-God.

Throughout her outrageous exploits—including an exploding pressure cooker, a runaway horse, and encounters with Margaret, the family ghost—Peppe maintains an insatiable curiosity, a voracious appetite for books, and an unconditional love for animals of every shape and size.

“A writer and photographer’s wry but poignant account of her hardscrabble childhood and adolescence in rural New England…Unsentimental in its character portrayals and forthright yet humorous in its depiction of devastated innocence and family dysfunction, Peppe’s book is a celebration of difference, resilience and the healing power of love.”